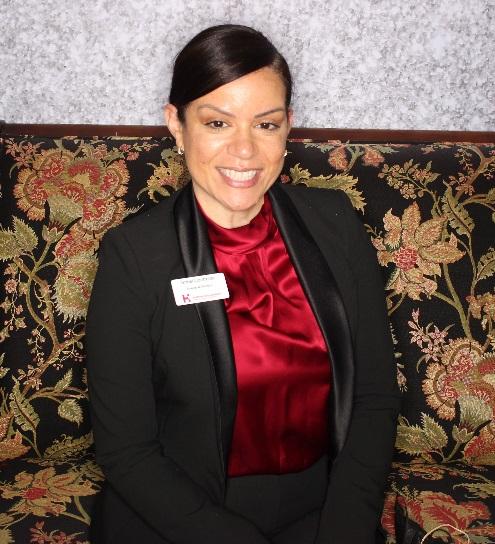 Grisel brings to Hoffman SummerWood more than 16 years of health care experience.  She has led  Home Care and Hospice business operations and capital budgets for two of the largest post-acute care hospital systems in Connecticut; Trinity Health of New England and Hartford HealthCare.  Grisel’s focused strengths include improving satisfaction among residents and their family members, sustaining profitability, creating operational efficiency, and enhancing quality and safety.  Grisel received a Bachelor’s of Science Degree in Urban Studies from St. Peters College and a Master’s Degree in Business Administration with a specialty in nonprofit management.  In addition, Grisel is certified in LEAN SIX SIGMA processes and currently holds a Green Belt. 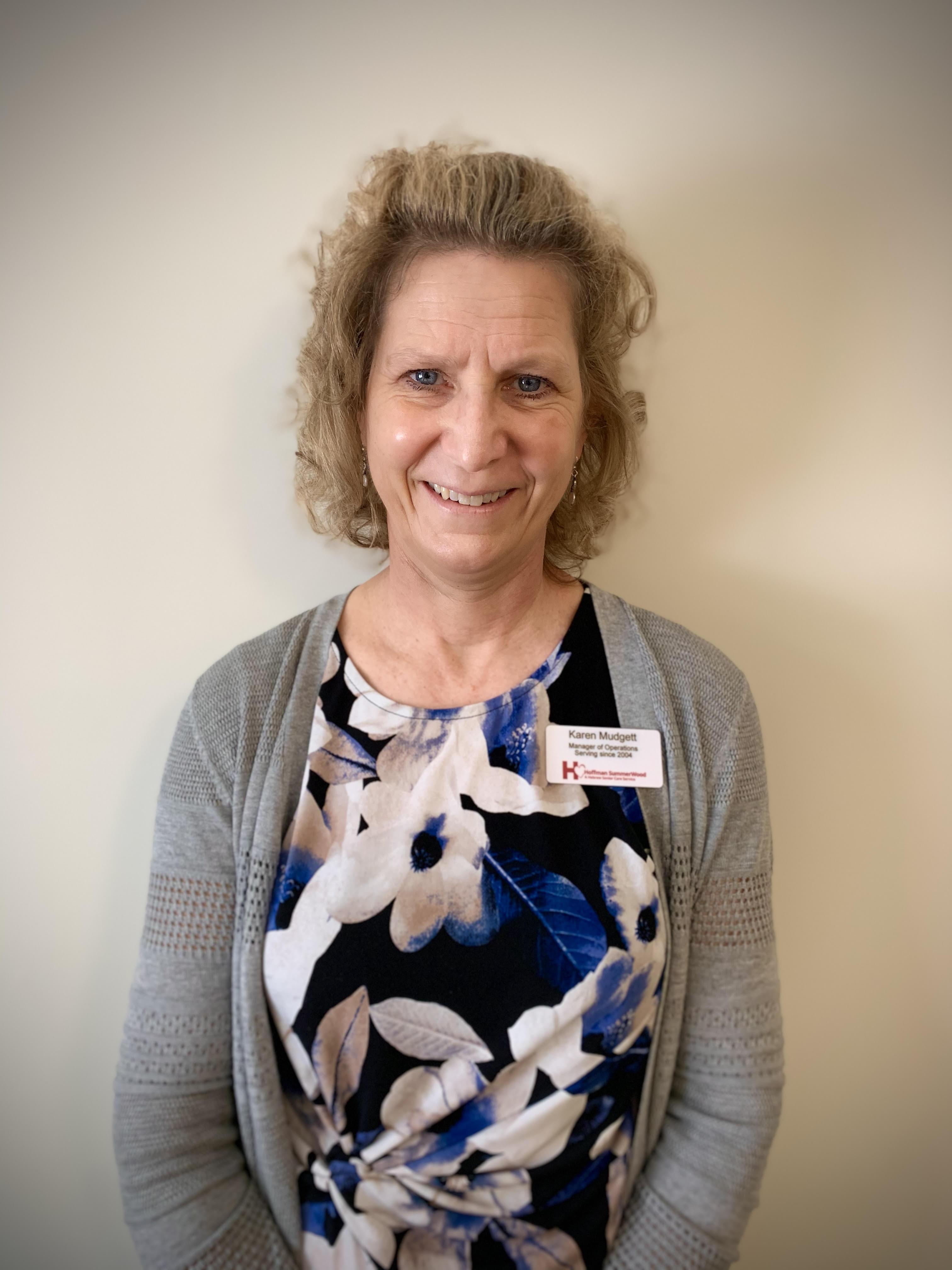 Karen Mudgett, Manager of Operations, has been with SummerWood since 2004.  Ms. Mudgett works closely with the Member Services Coordinator while supervising the front desk staff and housekeeping staff. Among her other responsibilities, she annually reviews and updates policies and procedures including the three SummerWood handbooks, and assures staff receive the required annual in-services and complete the competencies specific to their departments.

Ms. Mudgett was honored by the Connecticut Assisted Living Association (CALA) with an Outstanding Resident Service Award in 2014.

Jina LaFleur, RN, brings not only a compassionate heart but a dedicated passion for caring for SummerWood's seniors. Jina first began her career directly following her graduating from Western Connecticut State University in 2002. With a continued concentration in adult and geriatric care, Jina has field experience as a Nurse in an ICU (Intensive Care Unit) setting, specializing in the stroke unit and as an Infection Prevention and Control Nurse. Throughout her career, she has taken to supervising and leadership roles, including acting as Nursing manager and Program Supervisor for clinical nurses in multiple long term care facilities and group homes. As part of her administrative role, Jina was responsible for the training and educational in-services for her team of clinicians including specialty informational sessions on developmental disabilities; acute geriatric care and dementia/ Alzheimer’s care.  Jina continues to be an effective teacher for her designated nursing team of RN’s (Registered Nurses), LPN’s (Licensed Practicing Nurses) and CNA’s (Certified Nursing Assistants) at Hoffman SummerWood. Under Jina’s leadership, the nursing team at Hoffman SummerWood provides each and every Assisted Living resident with the customized care, expertise, resources, and education that enables a safe, comfortable and enjoyable environment of living with a helping hand around every corner.

Amanda Sisson, Resident Services Coordinator, has been with SummerWood since 2007.  Ms. Sisson works closely with the residents and their families making sure that all of their needs are met by working closely with the Assisted Living Services Agency (ALSA). She is the staff liaison for the Member Council and she arranges educational in-services for family members and caregivers.

In 2012, Ms. Sisson became a Certified Dementia Practitioner (CDP) through the National Council of Certified Dementia Practitioners (NCCDP). Ms. Sisson was honored in 2011 with the Champion for Seniors Award from the Assisted Living Federation of America (ALFA) She began her career in 1999 as a social worker in a nursing home, working with both short and long-term care residents. She holds a Bachelor Degree in Social Work from Central Connecticut State University. 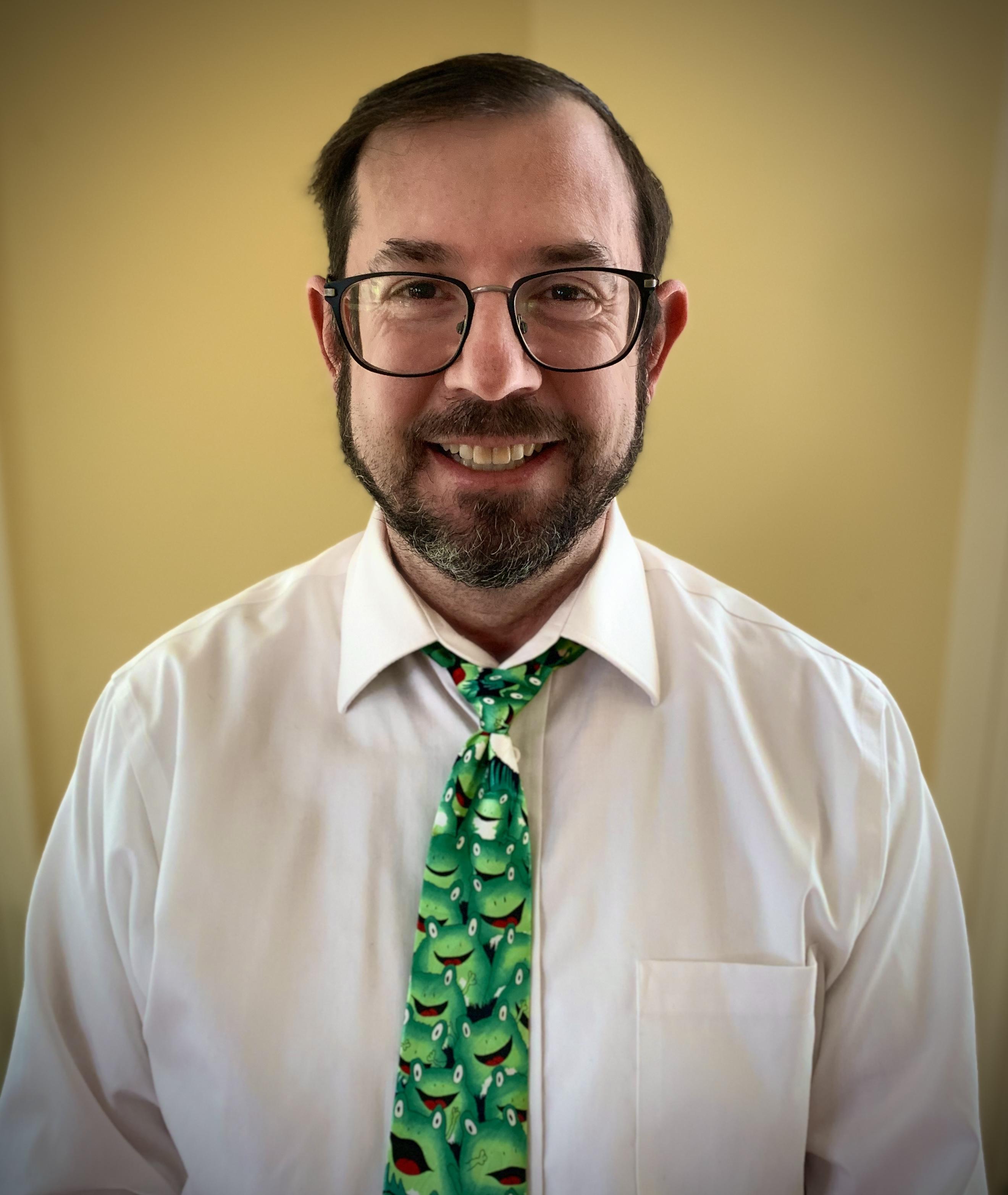 Rabbi Aaron Jaffee has taught in the U.S., Australia and Israel. He earned Smicha while living in Israel and holds a BA in Education. Rabbi Jaffee has taught and served Jewish communities on many continents for almost three decades, including acting as the full-time Rabbi for Young Israel, and today acts as the Community Rabbi for Hoffman SummerWood.

Rabbi Jaffee has been the Principal of Beth Sholom B’nai Israel’s Hebrew school for 10 years and Jewish Education Director at Temple Sinai. As an effective supervising teacher elected by Monash University. he has taught many subjects including: Talmud, Navi, Dinim, Jewish History, and   Jewish Philosophy and brings this education to the residents of Hoffman SummerWood. Rabbi Jaffee offers weekly Torah and Parsha classes and a multitude of religious services, activities, programs and events. Rabbi Jaffee has led and prepared Bar and Bat Mitzvahs for children in addition to now fulfilling senior residents dreams of having a Bar or Bat Mitzvah.

“Pastoral care” is also a significant part of Rabbi Jaffee’s role in the SummerWood community, including having an open-door policy for residents to stop by and kibbitz, kvell, discuss topics and schmooze. Rabbi provides death and bereavement counseling; spiritual guidance and support to residents and their families of the SummerWood community.  He brings 20 years Kashrut experiences as Rabbinical supervisor for the Star-K and RCW- Rabbinical Council of Washington, HKC- Hartford Kashrut Council.

Rabbi Jaffee is happily married for 32 years to Shaindy Jaffee, a University of Connecticut graduate and is currently working on her Master’s in Special Ed. They have 3 beautiful girls and 2 even more beautiful grandchildren and 2 beloved dogs. 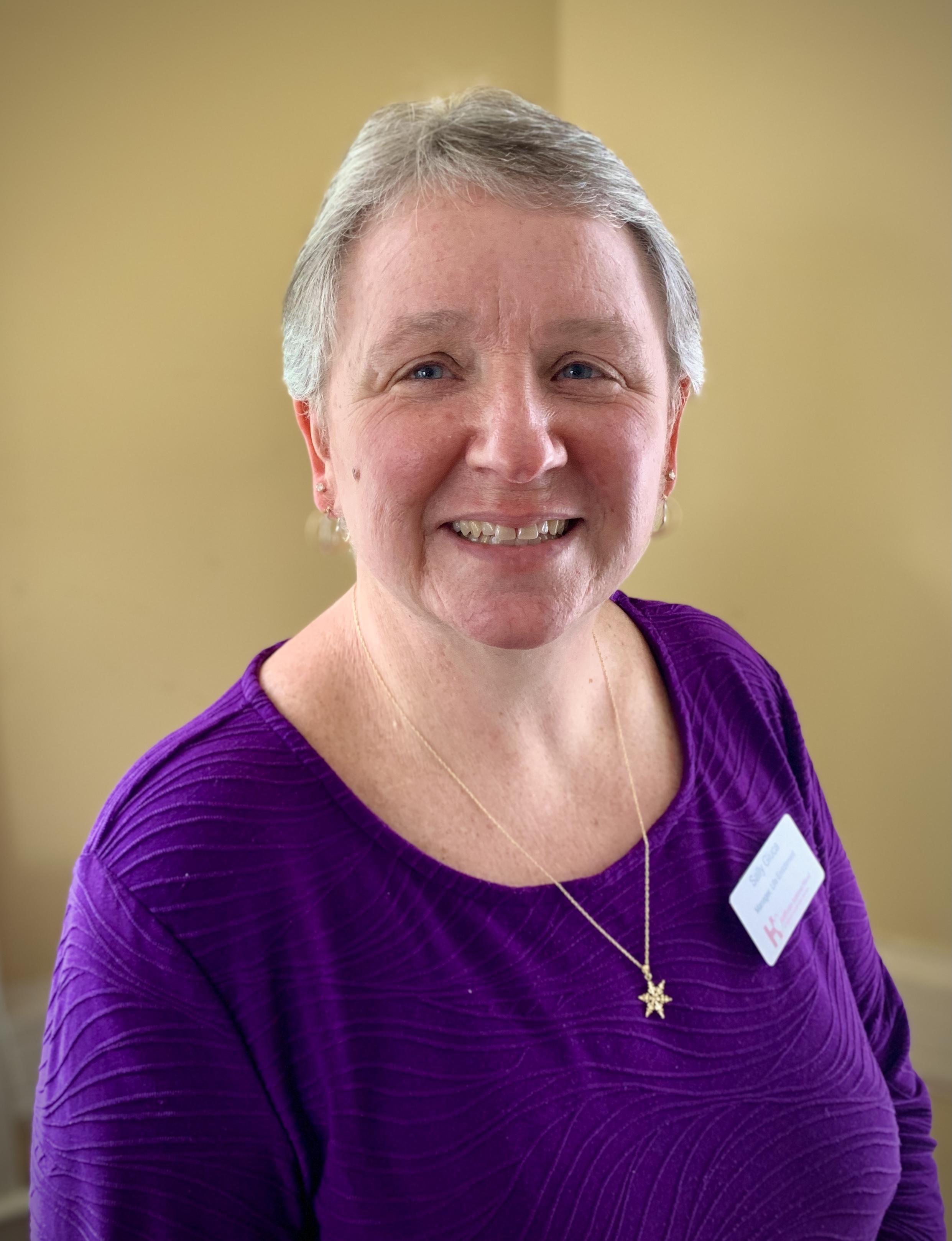 Sally Giuca joined the Hoffman SummerWood team in August of 2020 as the Life Enrichment Director. She brings with her 30+ years in the Senior Recreation field. She graduated from Southern Connecticut State University in 1990 with a Bachelor of Science in Leisure Services with a concentration in Therapeutic Recreation. Sally spends her days at SummerWood providing residents with a variety of activities, events and outings, and schedules visiting entertainment such as musical groups; poetry and short story workshops; all-skill level painting classes, other hobby groups, lectures and discussion opportunities. Sally coordinates daily exercise and educational classes and religious services for the residents and manages the on-site gift shop, store and salon schedule.

Ms. Guica worked in the field of skilled nursing for 12 years and the following 18 years worked as the Recreational Director in the Adult Day Center and Frances Warde Towers at Saint Mary Home. She holds her public service operators license(PSOL) and loves transporting the residents of SummerWood to and from recreational outings and activities within the local Jewish community.

“I love working with this population because of the history that the residents have; I love to learn about each person and I embrace bringing them smiles! Who knows- maybe being the youngest of six girls ultimately instilled in me to respect my elders.”

Executive Chef Marcos Calderon comes from a family of entrepreneurs with parents who ran a successful catering business for many decades titled ‘Calderon Catering’, servicing all 5 boroughs of New York. Marcos mentions that the food business is in his DNA, and quickly followed in his parents footsteps graduating from The Culinary Career School for Development.

Since then he has been nationally accepted by the ACF (American Culinary Federation) and was recruited by major food industry leaders such as Brinker International, and General Mills to open, train and establish new national restaurant chains such as The Red Lobster, Smokey Bones, Olive Garden, Macaroni Grill and Chili’s.

Chef Marcos was offered and chosen to be a contestant on “Chopped”, a cooking reality television show. In addition, he was honored to work with nationally acclaimed Master Chefs and bakers, including David Glass from David’s Cookies.

After moving to Connecticut, he continued working in the food industries and was introduced to the exciting food culture of Kosher. Since then, he has catered Bar/ Bat Mitzvahs, weddings, Brit Mila, Holiday meals, Kiddushim at Synagogues throughout West Hartford, including Hebrew Senior Care and The Crown Market; and received the title of official caterer for Chabad Shul and for Camp Gan Izzy.

Chef Marcos brings a wealth of experience to our Kosher kitchen and SummerWood Dining Room, having served in the community since 2011.

Jay Bourret is the Facility Manager and has been with SummerWood since 2004. Mr. Bourret responsibilities include overseeing and faclitiating all maintenance services for the building and community. Mr. Bourret is committed to keeping the building secure, up-to-date and comfortable for all residents, while also providing preventative maintenance.

Mr. Bourret received the Employee of the Year Award in 2010 from the Connecticut Association of Non-for profit Providers For the Aging (CANPFA), now know as Leading Age Connecticut. He also received the Outstanding Resident Services Award from The Connecticut Assisted Living Association (CALA) in 2009. He is a graduate of New England Technical Institute for HVAC/R and holds State of Connecticut licenses for Sheet Metal, HVAC/R and Home Improvement Contractor. Jay has worked in the HVAC/R and Hospitality fields for over 30 years, and enjoys lending his efforts towards helping SummerWood’s seniors live with comfort and ease knowing there is always a helping hand nearby.

Sophia has worked with the Hoffman SummerWood community since early 2019. When initially joining the team, she acted as the Activities Assistant, providing programs and activities for the residents. There she quickly learned how much she enjoyed serving the residents and helping them to feel at home. One year later, she became the Marketing and Admissions Coordinator, cultivating relationships with the local Jewish and West Hartford community while assisting and guiding prospective new residents in their transition to Hoffman SummerWood.

Sophia brings with her many years of customer-service and community relations, including a strong background in the performing arts and artistic fields.  She enjoys not only meeting new community members, but is also enthusiastic about connecting with their family members to provide counseling and support throughout the decision making process. The family connection continues to be a strong value in Sophia’s efforts – by providing resident virtual video chats with loved ones and offering effective communication with families through monthly newsletters and personalized email photo updates.

Interested in coming by for a tour? Sophia’s door remains open and is happy to invite you in for a safely-distanced lunch and the available units and Hoffman SummerWood community.